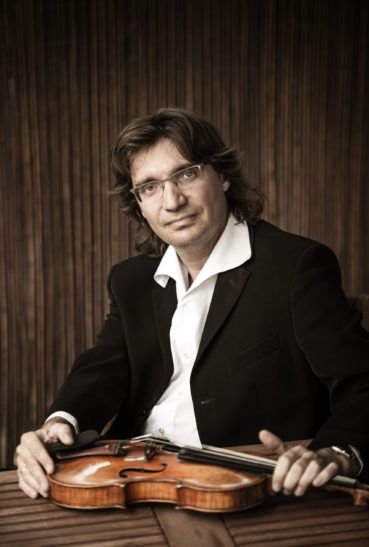 The last of Brahms’ four symphonies was premiered less than two years before his death – like many of his late works, it too is pervaded by melancholic mood, especially present in the intensely moving first movement. The final fragment is an elaborate passacaglia – a variation on a Baroque form quite unusual in symphonic music (marked also by quoting a thematic motif from Bach’s cantata Nach dir, Herr, verlanget mich. Brahms deeply admired Bach, he also edited pioneering editions of this Leipzig cantor’s works). Despite its traditional architectonics, the entire symphony contains several innovative and original formal elements. It is counted among major items in the canon of late-Romantic symphonic music and is regarded as Brahms’s most significant achievement in orchestral music.

In the 1960s, many composers felt weary of the avant-garde’s quest, over-intellectualisation and uncommunicativeness of serialism, and thus decided that music should return to its (presumed) original simplicity extended to all its aspects: harmony and rhythm, as well as expressive and performing means. This is how the “anti-modernist” trend was born. It was called minimalist by analogy with the visual arts (where – paradoxically – it was an expression of modernism), and eagerly referred to non-European ethnic music, including jazz. It was mainly created by American composers from the generation which grew up after World War II: La Monte Young, Terry Riley, Steve Reich, with Philip Glass in particular becoming an “iconic” figure. His Violin Concerto No. 2 of 2009, entitled American Four Seasons, intentionally refers to the similar famous cycle by Antonio Vivaldi. Here, however, there are four separate movements dedicated to the seasons (preceded by a prologue and divided by “song” interludes), rather than separate concertos. In the course of exchanges with the dedicatee, violinist Robert McDuffie, the composer argued about how they both perceived the musical illustration of the seasons. Therefore, eventually, the movements do not bear definitive titles to identify them, while their interpretation is left to the listener’s imagination.

During the concert in January, this peculiar riddle will be presented to the listeners by Piotr Pławner, performing in a dual role as a soloist and conductor. Pławner is among the most outstanding and creative Polish cellists of his generation, as well as a winner of the International Henryk Wieniawski Competition in Poznań in 1991 (ex aequo with Bartłomiej Nizioł) and laureate of many other prestigious competitions and awards, with an impressive concert and recording output. “He is one of the greatest talents of our time. He is a genius who can arouse even the most austere audience with his demonicity, bravura and virtuosity!” – the great Yehudi Menuhin spoke of him with delight, and Piotr Pławner’s career fully confirms this opinion. [pmac]